October is a time when the world circulates every few days who will receive the Alfred Nobel Memorial Prize in particular fields in 2020.

The Central Bank of Sweden, which has sponsored the economic award, in 2020 year honored two American economists: Paul Milgrom and his PhD thesis supervisor Robert Wilson.

The prize will be awarded for research on the theory of auction, which is also widely used in the energy market.

Reading an article by Witold Gadomski about 2020 Nobel laureates in economics, I was, however, interested in a completely different statement by Robert Milgrom:

“If the markets are in an effective equilibrium, there is no unreasonable price interference, and the traders get information in the same way, even if some may have private information, none will be able to profit from it. In other words - if there is common knowledge of the market structure, then any bid to buy or sell will reveal the private knowledge of the bidder and affect the price before anyone accepts the offer. So having private information will not bring you extra profit. ”

What could this have to do with purchasing energy? In my opinion, we can use this statement to prove the thesis that wholesale energy trading on the commodity exchange has a positive effect on the market. Thus, I would like to refer to the ongoing dispute about the superiority of the power exchange obligation over the lack of it.

History of the power exchange obligation

Let us recall the history of the exchange obligation on the Polish energy market.

In 2010, following a discussion triggered by industrial consumers who complained that they were unable to check the competitiveness of price levels due to lack of market access, an obligation to trade on TGE was introduced for:

What was the effect of introducing only the 15% obligation to trade through the Polish Power Exchange?

First of all, it was to increase market transparency. So, returning to 2020 Nobel laureate, market participants could obtain information in the same way. For industrial customers, who are the largest energy consumers, this meant the possibility of setting energy prices based on quotations on the wholesale market. This led to significant energy savings in these companies.

It was a milestone in the development of energy trading on TGE. It would seem that it is only 15%, but it was indeed a key moment for the Polish energy market.

The Office of Competition and Consumer Protection in its decision (DECISION No. DKK-156/2017) approving the takeover of EDF Polska by PGE referred to the reservations of other energy companies (including state-owned companies) that after the takeover, PGE's dominant position in the generation segments will increase and sales to end users on the energy market and imposed on PGE an obligation to trade on TGE for the volume of the acquired Rybnik power plant. It is also worth noting that the Energy Regulatory Office issued a negative opinion on the acquisition precisely because of the reduction of competition.

At the beginning of February 2018, the obligation of wholesale trading on TGE was increased to 30%. After the idea of ​​the opposition to increase the power exchange obligation in order to reduce the risk of an impact on the prices of producers increasing their market position as a result of concentration of production capacity, the National Bank of Poland gave a positive opinion. The Ministry of Energy added the increased power exchange obligation not to 50%, but up to 30% to the act on the capacity market that was being processed at that time.

At the end of 2018, the then Ministry of Energy proposed the introduction of a 100% obligation in order to prevent uncontrolled increases. In the course of the legislative work, the original proposal was considerably softened by introducing an exception allowing the omission of those energy sales contracts that had been concluded before the imposition of 100% of the obligation.

The idea of ​​abandoning the stock exchange obligation, mentioned earlier, appeared during talks with mining trade unions on the restructuring of the mining sector in September this year. As we know, a lively discussion broke out, which was reflected in many publications.

In January 2013, the President of the Energy Regulatory Office presented the Roadmap for the liberalization of natural gas prices.

Due to the strong concentration of the market, the document assumes a gradual liberalization of prices for customers with different consumption volumes and a gradual increase in the exchange obligation.

The map assumed the following progression for gas trading on the gas exchange:

In the beginning, it was 30%. Over the next two years, the gas exchange obligation for wholesale gas trading increased. The 70% level never came into force and was replaced with 55% that are still in force today.

I think that the introduction of this obligation was to a large extent the source of the success that we have undoubtedly achieved in creating a competitive gas market in this part of Europe. It was not only the companies that wanted to take over a part of the market dominated by a single player, which was PGNiG, but also the recipients of blue fuel benefited from this. Pressure from alternative natural gas sellers in Poland has resulted in a significant change and a significant increase in the flexibility and attractiveness of offers on the Polish market. 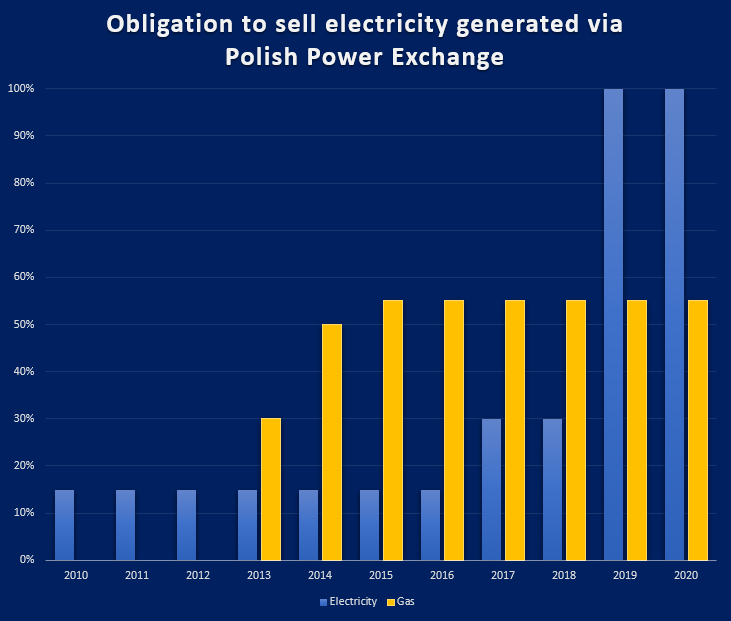 The new is coming

On the 26th of January 2021 appeared a document suggesting another change (draft act amending the act - Energy Law and the act on renewable energy sources). The legislator in Poland is going to abolish in 2021 the requirement for energy producers to sell entire volumes of electricity through the Polish Power Exchange (TGE).

Well... a long way from 0% through 15, 30 to reach 100% price clarity it seems we end up with 0% again. Energy price transparency in Poland will be put to a great test. Should this happen in times of new capacity market fee introduction from the begginning of 2021 and pandemia effects on Polish economy?

Of course, it would be better if market participants did not need top-down regulation and would direct their wholesale energy trading to TGE themselves. But since we are not able to act transparently ourselves, it is better of two bad things when the principle of transparency is introduced top-down and applies to all market participants in the same way.

Due to the introduction of the obligation, at least for key market participants, such as industrial customers, the situation with obtaining transparent information on the current level of wholesale energy prices improved significantly.

We should ensure that the energy market is in an effective balance. When the equilibrium is disturbed, there may be an unreasonable interference in prices. An example of such interference was the entry into force of the Act in January 2019, according to which the prices for end users of 30th June 2018 were the maximum prices for 2019.

Of course, at this point it is an academic discussion as to whether the problem would arise if there had not been a significant concentration with one seller at that time and whether there had been a decline in trading volumes and an increase in prices. The President of the Polish Power Exchange, in the letter preceding the 2018 summary, expressed his concern that he hopes that the introduction of energy price freezing regulations will not significantly affect the level of trade on the Polish Power Exchange.

As we know, in the energy market, everything must always be in balance. Time will show whether the theory of this year's Nobel Prize winner about the state of effective equilibrium, implemented by trading on the Polish Power Exchange, will survive, and end-users will be able to track price volatility and make their purchasing decisions based on transparent information.