3 alternatives to stabilize the cost of energy in your company

It is not true that electricity prices have become unpredictable and very volatile in the last year. They were always like that! It is true, however, that in 2018 one of the most spectacular price increases for electricity supplies in the following year (2019) took place in history. Many companies are still wondering how to cover the energy bill, because the costs practically completely "ate" their margins and significantly reduced the competitiveness of the company. However, it should be remembered that the fact that today electrical power is expensive does not mean that the situation will change radically in favor of consumers. It's a market (sic!). 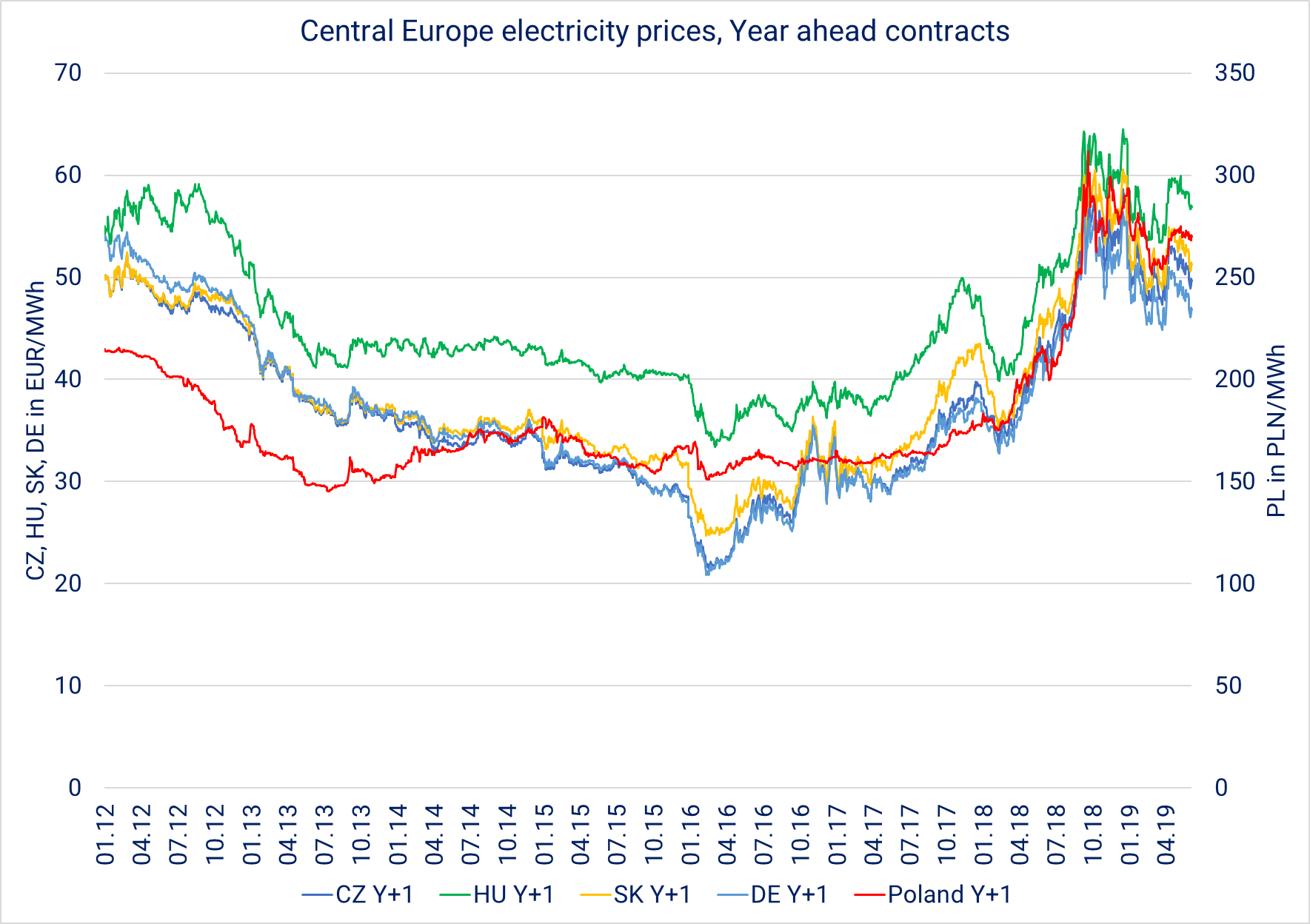 "I am hedging now for several years in advance and I hope that it will be more expensive and I will have stable energy costs." It's difficult to say whether I will do a good job hedging now, but it will certainly be stable - I often meet with such considerations on the part of entrepreneurs in the current situation.

To illustrate it, I will give an example: after the tsunami and the Fukushima disaster and the decision of the German government to abandon the production of electricity in nuclear power plants, prices increased in the short term by 20%. After this decision, many companies hedged the price of energy in 2011 for 2012, 2013 and 2014. "It's hard data, it will only be more expensive" - ​​many people commented justifying their decisions. The consumers, however, did not take into account the growing importance of shale gas expansion in the US, growing coal inventories in the world and the fall in prices of this raw material. In 2013, for 1 MWh of electricity in deliveries for 2014 in Germany, the consumer could have paid about 40% less than when buying for this year in 2011. With a consumption of 10.000 MWh per year, the lost opportunity or in other words the not the best decision is worth around 250.000 euro.

The International Renewable Energy Agency (IRENA) report for the year 2018 published at the end of May shows that the end of the era of energy generation from coal is approaching around the world. Since 2008, the global share of wind farm production has increased more than fivefold, with 115 GW, according to IRENA, up to 590 GW of installed capacity in 2018.

Will not the price of coal fall behind the RES boom and reduce the demand for coal, so that electricity will again be cheap from the grid? It could be so, if not the rising prices of CO2, which effectively prevent such a trend.

We can already say that it is getting closer to the so-called network parity, in other words a situation in which the price of RES electricity without subsidies is cheaper than the electricity price from the grid (in Europe the grid parity is already reaching solar installations, i.e. in Spain, Italy, the Netherlands and Germany).

The awareness of the end consumer is also growing. We are more willing to participate in the implementation of the Paris Agreement on stopping global warming below 2°C. Everything points to the fact that the trend of RES development cannot be stopped. 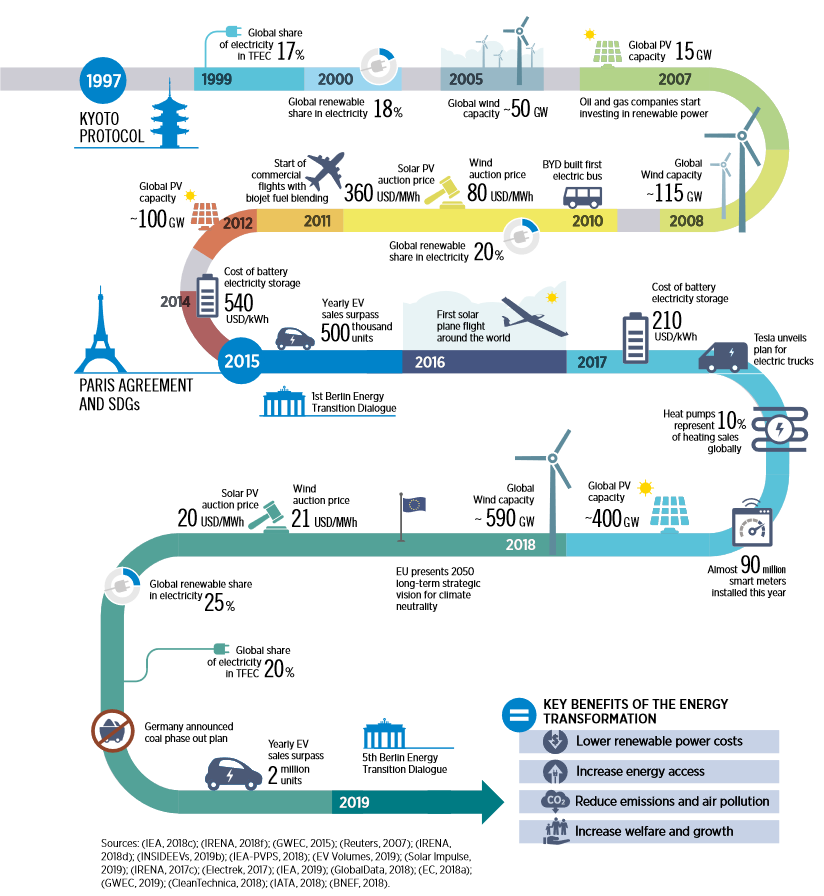 Alternatives to a standard contract for the purchase of energy

Due to the considerable year-on-year increase in the budget caused by the sharp rise in wholesale prices, many companies are looking for ways to reduce the cost of electricity or at least to stabilize it in the long term. What's more, together with the growing climate awareness, companies want to reduce their CO2 emissions. The interest in renewable energy grows very fast.

There are at least a few options:

An investment in auto production, for example in a solar installation or a wind turbine, is one of the hot topics in Europe in recent years. Year on year, the costs of photovoltaic installations are decreasing at a rapid pace. The technology of these sources is also improving, increasing efficiency and lowering the return on investment. When constructing, for example, a solar installation on the roof or side wall of our production facility or warehouse, we have the opportunity to be an investor. We are therefore interested in the fastest rate of return on investment, so that after this period we can enjoy free electricity for at least part of our needs. In Poland, governmental work is currently underway to update the RES Act, which may extend the prosumer concept and facilitate RES installations with a capacity above 50kW.

The situation is different in long-term PPA's, where the investment in the source of production is on the developer's side. We have several types of PPAs. Most often we find on-site and off-site contracts. On-site PPA is a contract for the installation of renewable energy source located directly at our connection point, i.e. a solar installation on the roof of our building. An off-site PPA is a RES installation of a developer located in the country, but outside our property, where electricity is supplied to our company using a transmission or distribution network. On the commercial side, we set a price with the developer of the installation for 1 MWh - fixed or variable for a period of 3 to even 25 years. Our benefits include price stabilization in the long-term horizon (or prices that follow the market) and the possibility of receiving guarantees of origin of energy from renewable sources - we reduce our company's CO2 footprint. Developer benefits by ensuring a steady income from the client and thereby guaranteeing the repayment of any loan taken for this purpose, covering costs and generating a certain profit.

What is the best for my company today?

There is no universal answer which solution is best for a given company. The right decision about the alternative scenario should always be preceded by a reliable analysis and calculations. More and more such solutions appear on the market and it is not worth choosing only the first one that fell into our hands. To make a decision I encourage you to answer the following questions:

I am curious about a direction your company has chosen. Get in touch with us and share your experience on that field.