The impact of the war in Ukraine on energy purchases.

Russia's invasion of Ukraine opens up many questions about the future of the energy market in Europe.

What can we expect? Will the European and Polish economy or ordinary citizens?

These are, of course, rhetorical questions because every war, apart from first and foremost human casualties, has economic consequences. Russia's attack on Ukraine and open war have an evident impact on the energy market. In this case, too, it becomes obvious that the energy alliances in Europe should be thoroughly verified and rebuilt. Especially those with Russia - and this, as we all expect, will have consequences.

Sudden cut-off from Russia. Concerns about shortages of raw materials.

Many companies are asking themselves the question: how much can Poland withstand without gas supplies from Russia and whether their businesses are at risk at the moment. Unfortunately, Russia is the leading exporter of natural gas to Europe. The current division of the market is illustrated in the following infographic: 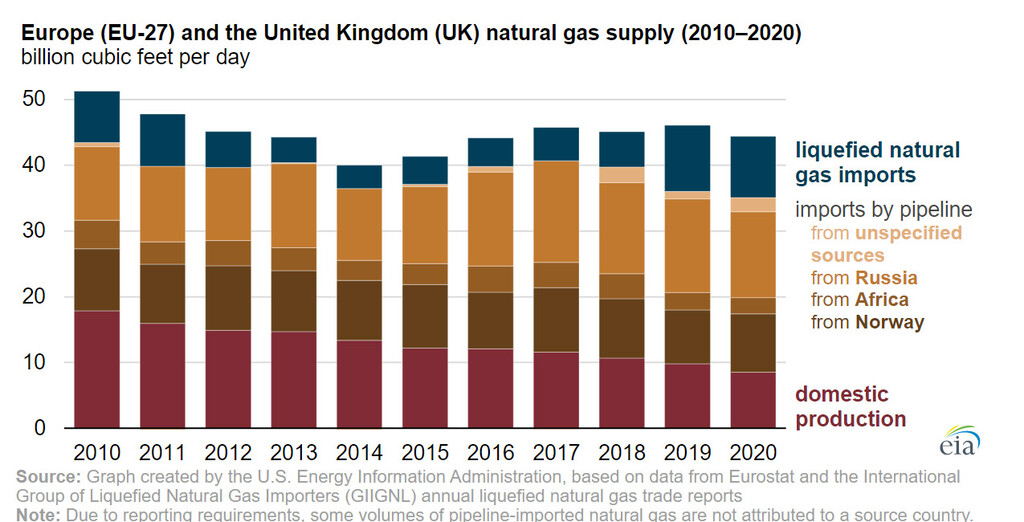 It isn't easy to imagine that the gas purchased from Russia could soon be replaced by LNG supplies from other countries in a 1: 1 ratio. Europe already experienced last year what the limited supplies of gas from Russia mean, especially in the winter season. After all, the Yamal gas pipeline has practically not been used for over 2 months, and gas from Russia flows only through the Nord Stream 1 connection and the Brotherhood gas pipeline through Ukraine and Slovakia. The situation is saved mainly by the mild winter and the very unusual, so far, highly abundant supplies of liquefied gas from the USA. However, this is only an easing of the situation - gas prices in Europe have been at historically unprecedented high levels for many months.

In 2020, Poland imported about 9 billion cubic meters of natural gas from Russia, which accounted for nearly half of Poland's demand for this fuel. The primary natural gas consumers in Poland are industry, households, and heating.

Gas storage facilities in Poland, with a capacity of approximately 3 billion cubic meters, If we cut off Russian gas supplies, would be sufficient for around 2 months with average consumption. Of course, in an emergency, Polska Spółka Gazownictwa may introduce restrictions on natural gas consumption by imposing supply levels on consumers to ensure the longest possible availability period for strategic entities and households. Therefore, industrial and large consumers of natural gas will undoubtedly suffer. For some companies, shutting down gas supplies for a more extended period can have very serious consequences.

Currently, gas storage levels in Europe are not at their historical lowest levels. A mild winter, good wind conditions, and LNG gas supplies to Europe improved this situation. 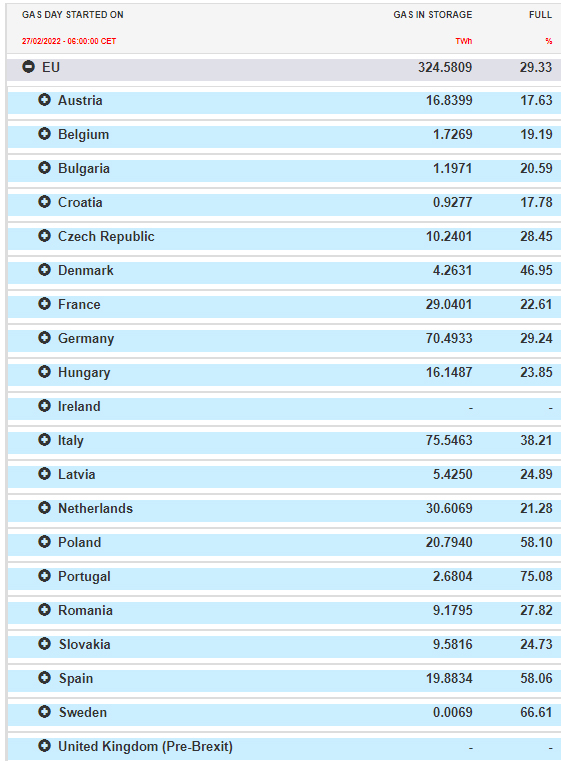 New gas investments may be a chance for Poland to overcome the impasse. At the end of 2022, Poland should start operating a new connection with the Norwegian shelf - the Baltic Pipe gas pipeline (https://www.gaz-system.pl/fileadmin/pliki/przetargi/pl/Strefa_Dostyczki/Projekt_Baltic_Pipe.pdf), which is ultimately to have a throughput of 10 billion cubic meters. In addition, in 2016, an LNG terminal was launched in Świnoujście. It has a 5 billion cubic meters (currently, it is being expanded to 7.5 billion cubic meters). Therefore, it can be easily calculated that, theoretically, Poland should cope with it from the beginning of 2023 and will have an alternative to Russian blue fuel. Of course, the questions remain open - will the Baltic Pipe be considered one of those critical Polish projects completed on time, even ahead of schedule? And how quickly it will be possible to achieve the maximum capacity on this pipeline. PGNiG boasts of its gas deposits in the North Sea. In addition, shorter contracts with producers working on the Norwegian shelf should ensure Poland's stabilization of supplies. 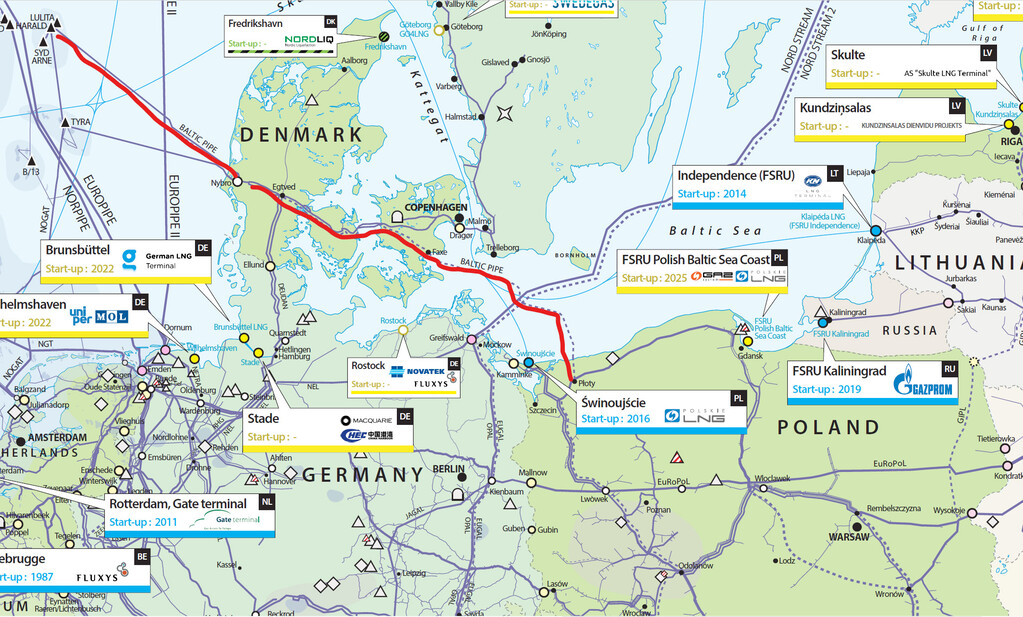 It's time to bet on LNG!

Unfortunately, the direction of LNG supplies depends on the economic calculation. Recently, we had to deal with a situation where gas-filled ships going to Asian ports, already in the Indian Ocean, decided to return to Europe - the selling price of gas on the Old Continent was much higher. However, we must bear in mind that LNG from the USA will not always flow to Europe in this dynamic market. 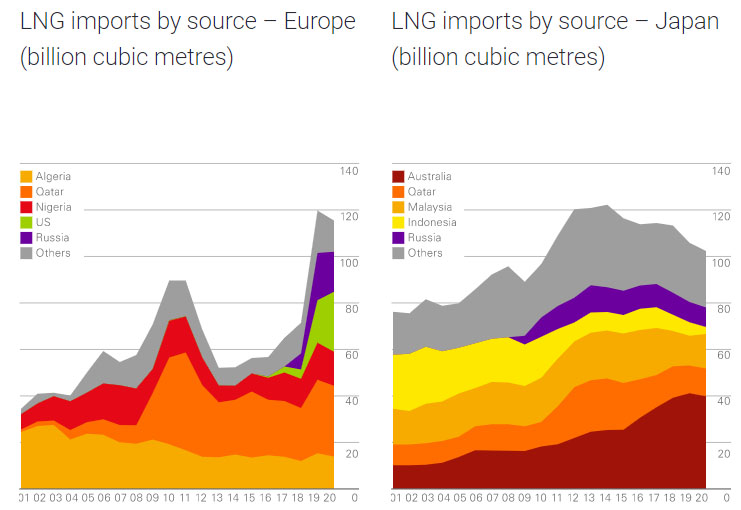 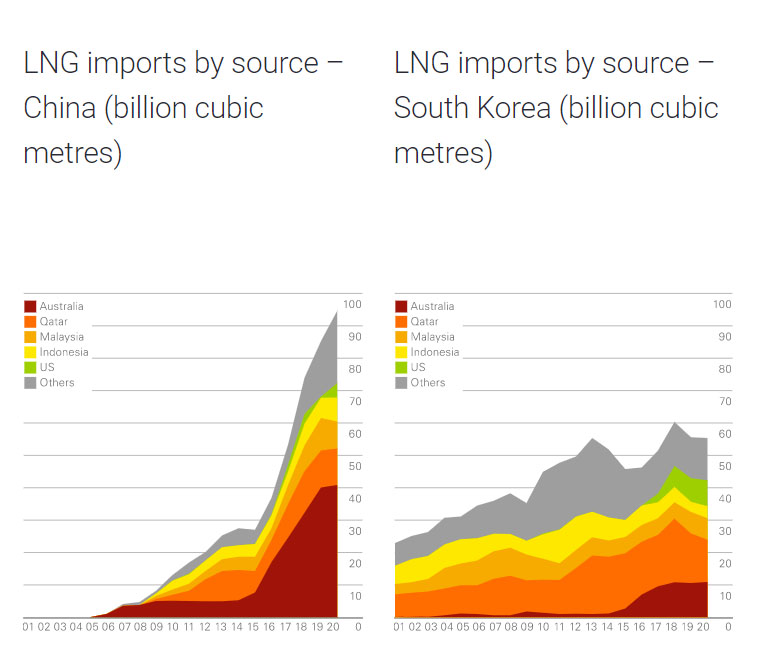 Let us remember that also at the beginning of 2021, when the winter in the Far East was severe, Europe had significant problems in obtaining LNG; especially at the time when Asia and Europe were to replenish stocks, and the gas crisis began: (more about this in the article: https://enerace.eu/en/a-path-towards-the-energy-crisis).

Climate change makes the seasons more unpredictable. Therefore, Europe and Asia can also compete for liquefied gas LNG in Q2 and Q3 2022, which will undoubtedly translate into higher gas prices for consumers. 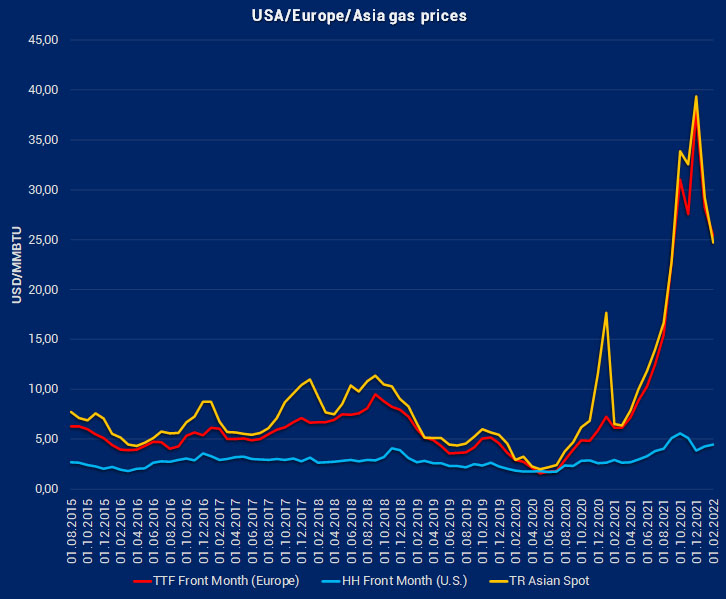 Source: own study based on Reuters.

Russia's current aggression towards Ukraine opens an entirely unknown direction of price levels, primarily of energy commodities (and others), which, as we know and can see in the accounts in the last few months, are frighteningly high.

Will Germany bet on LNG and nuclear power?

Germany is the largest importer of natural gas from Russia. In 2020, Germany imported over 45 billion cubic meters from Russia. Due to Russia's aggression towards Ukraine, Germany is accelerating work on two LNG terminals. Currently, Germany does not have any terminals for receiving liquefied gas by sea.

Currently, there are 36 LNG terminals in operation in Europe, and there are plans for another 21. 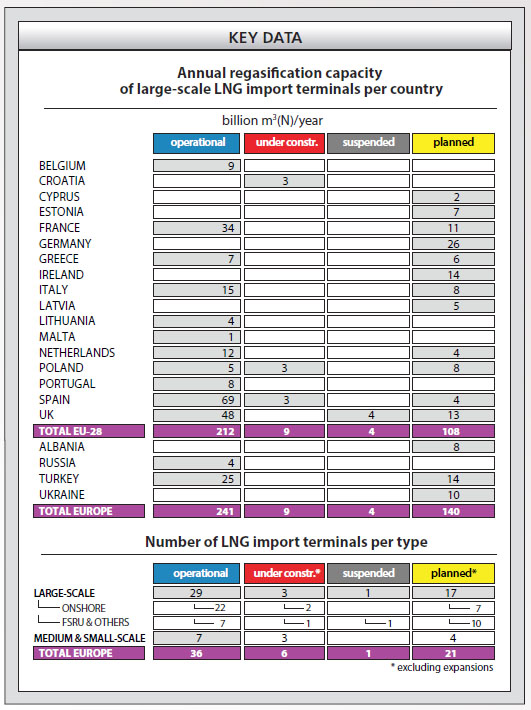 Will Germany go back to the nuclear power plant? This hypothesis is much more probable today than a few months ago. E.on Group, one of the owners of nuclear power plants, is ready to restart its operation. Currently, the last three nuclear reactors are in process in Germany. After the Fukushima disaster in 2011, pressure from the Greens and the elections to the German parliament, after which the party found itself in the government, Germany set itself the goal of shutting down all nuclear units by the end of 2022. This goal was successively pursued.

However, in the face of possible shortages of natural gas, there is a good chance that this essential economy for Europe will change its mind to ensure continuity in electricity supply to companies in this country. An additional impulse may come from French President Emmanuel Macron has announced the construction of 14 new nuclear reactors in France by 2050. 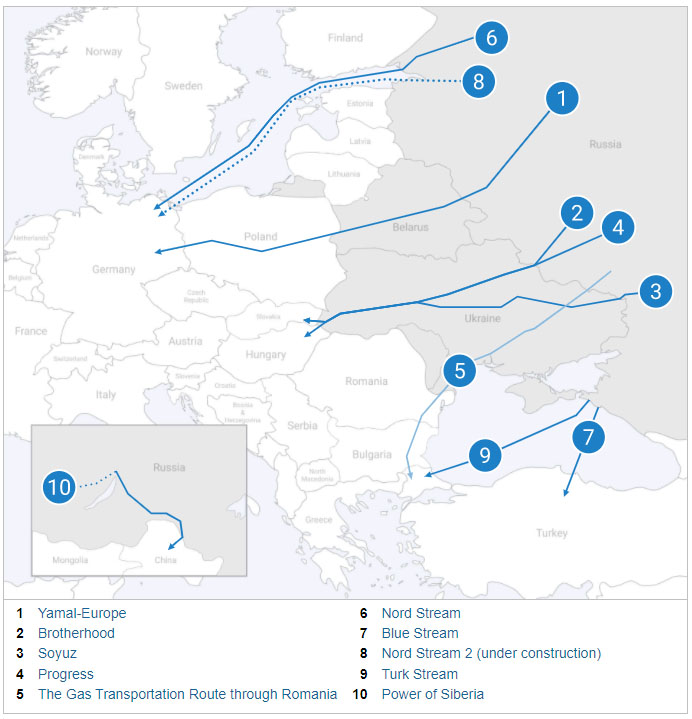 Will Europe rebuild its sources of supply of strategic energy resources, and when can this happen? This is an issue that requires much political agreement. Our direct influence on shaping energy policy is quite limited. Of course, as entrepreneurs, we can act through various industry and lobbying organizations. However, the energy policy of the individual Member States and the European Union itself will depend directly on the actions of politicians.

As entrepreneurs, we should instead focus on what we directly influence.

It is worth recalling a few basic issues that we should consider when buying energy:

1. First, don't panic or make hasty and quick decisions out of your emotions.

If so, go to the next step. If not - ask the sellers for an offer for a tranche agreement for subsequent periods. Do not necessarily secure your prices immediately. However, having a tranche purchase agreement will allow you to react quickly if the situation requires it.

4. Agree on the operating model in your own company. Involve the right people and assign responsibilities. Start with something simple like this: 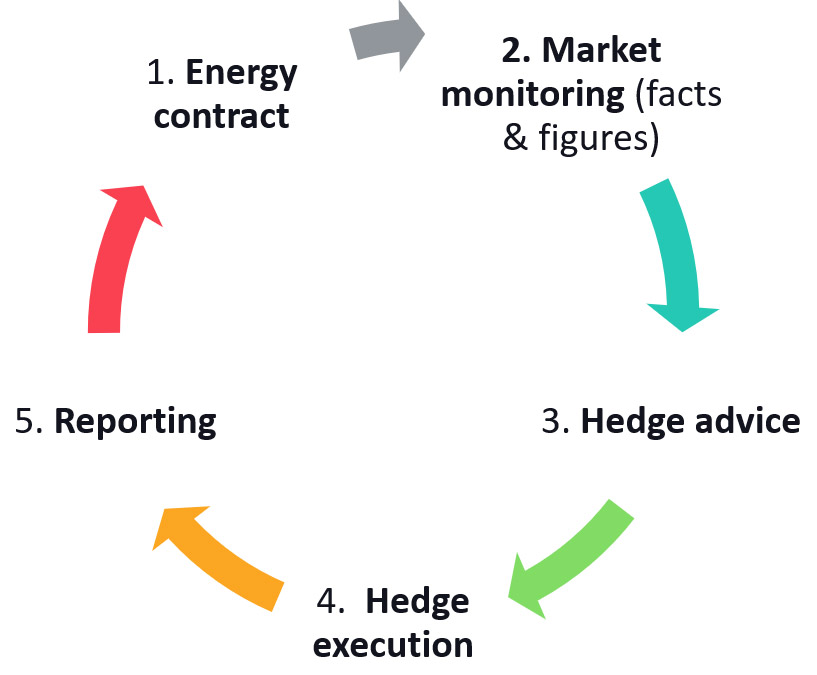 In conclusion - some useful links: